5 Most Common Causes of Erectile Dysfunction 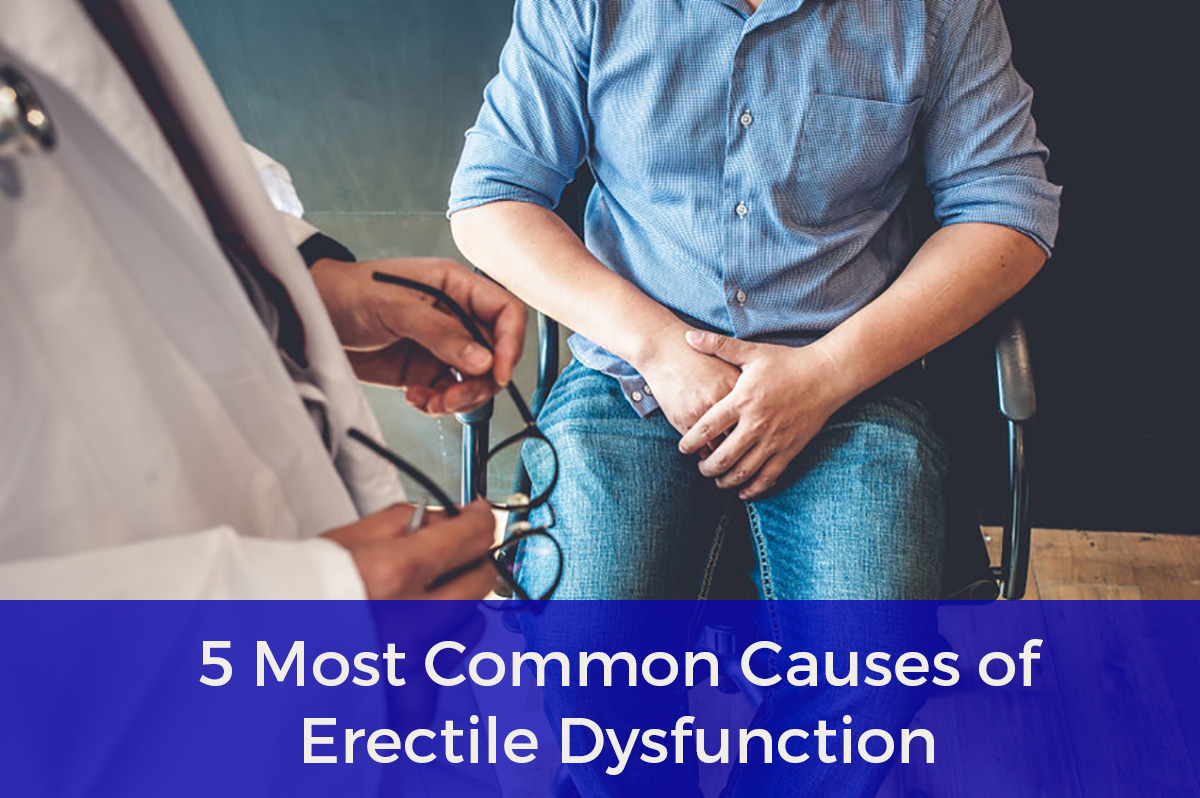 5 Most Common Causes of Erectile Dysfunction

Erectile dysfunction, otherwise referred to as impotence or ED, is a condition that is not uncommon. ED is usually defined by the inability of a man to get and/or keep an erection, causing immense difficulties in the bedroom and a deterioration of confidence. A real concern when ED occurs is whether or not it is directly related to a serious health issue.

While the likelihood of impotence increases with age, it shouldn’t be seen as an inevitable part of getting older. In most situations, the cause is likely in relation to an underlying health condition you may or may not know about.

While impotence can be temporary, like in terms of alcohol use, it should be known that there are other serious factors that cause a long-term inability to perform. Here are five different common causes that bring about a level of impotence to a degree of consistent struggle:

We know that being able to achieve an erection comes with sufficient blood flow to the prostate area and a balance of hormones within the body. Unfortunately, there are specific medications that decrease said blood flow as well as the hormones in the body.

While these medications vary from central nervous system depressants (CNS) to cancer chemotherapy medications, some are very common among the population. It should be noted that no one should refrain from taking medications related to ED without their doctor’s permission. Here are a few medications that could implicate bedroom performance:

Unfortunately there are many health implications that lead to impotence. These conditions typically all have one thing in common though; they inhabilitate the brain’s ability to communicate with the reproductive system. Nerve damage, disease, and neurological conditions all are great examples of what could be causing a lack of ability to get or maintain an erection.

Since impotence gradually becomes more likely with age, some diseases that are usually seen in older individuals only add to the risk that is already present. These kinds of diseases include Alzheimer’s and Parkinson’s. Though these diseases cause erectile dysfunction, it should be known that it is not related to the cognitive impairment they cause but rather the non-motor symptoms and progression of the disease implicating libido and sex drive.

Interestingly, heart disease and ED have very similar causes but heart disease itself could also have a part in impotence. Heart disease is also connected to atherosclerosis which is a cardiovascular issue that narrows the blood vessels throughout the body. Atherosclerosis is also the leading cause of ED and a serious sign of a future heart attack or stroke.

In terms of nerve damage, diabetes is a common perpetrator, specifically chronic diabetes. Diabetes directly affects the endocrine system, which is in charge of producing hormones and regulating aspects of the body like sexual function, reproduction and mood. Some common complications associated with diabetes include a lack of blood flow and poor hormone levels, contributing to impotence.

Everyone is entitled to their own lifestyle, though it should be considered that some choices are not the healthiest for you in one way or another. Such lifestyle choices include drug and alcohol use all have a part to play in active impotence.

The abuse of drugs and/or alcohol has a ton of negative effects on the body and how it functions. Drugs like cocaine, amphetamines, codeine and other prescription drugs all cause a significant decrease in the ability to hold or achieve an erection. Not only do these drugs damage blood vessels but also restrict the blood flow to the prostate region.

Alcohol, though it has a more temporary effect, can often turn into long-term impotence if alcohol use is abused. Alcohol is a depressant so when consumed it can lower someone’s mood as well as their sexual desire making it difficult to perform as well as reach orgasm. Though this occurs during the time in which one is intoxicated, by the next day it is usually resolved when they are no longer cognitively impaired. When alcohol is abused, however, it can make it very difficult to not be impaired since users become dependent and use more frequently, leading to consistent ED challenges.

Problems related to mental health like depression, stress and anxiety can surprisingly all lead to ED. Sexual desire begins within the brain and travels its way down and when mental health disorders come into the picture, things begin to fall apart.

Depression, a leading mental health disorder, can lessen sex drive and ultimately leads to ED. Unfortunately, many anti-depressants also can suppress sex drive and make it much more difficult to achieve an erection as well as a delay in orgasm.

Such problems can cause performance anxiety, which if continuous, causes impotence. This anxiety can begin at a young age as well, making it much more difficult in later years to uphold a regular and healthy sex life. All of these factors add stress unto the mind and cause even more damage to the psyche making performance almost intangible.

Mental health disorders also cause a lack of motivation which could also cause ED. Mental health affects all parts of the human body and how it functions. If someone does not take time to relax, to exercise regularly and/or to get enough sleep, not only does your mental health deteriorate but the risk of ED begins to rise.

Recent studies have suggested that being obese or overweight in general can even lead to erectile dysfunction (ED). Belly fat, or excess weight, is not the primary or only cause of ED, however, the conditions that come with being overweight or obese, such as heart disease, diabetes, and high cholesterol, can cause ED on their own. So, losing those extra inches will not only vastly improve your overall health, but it can also improve your love life – in more ways than one.

Overweight and/or obese men have a heightened risk of experiencing impotence. Not only do they have a lower level of testosterone but high blood pressure. Testosterone is very important in maintaining sexual desire and performing efficiently.

With the link to high blood pressure, the arteries within the body begin to harden. When this occurs, blood flow is restricted, debilitating the ability to get an erection. Now, it does take time to get back to a healthy state if one has become overweight or obese but there are foods someone can partake in to get back to a motivated, healthy state of mind and sex life.

Eating foods that are high in flavonoids help reduce the risk of ED, while also helping men drink less, smoke less and exercise more. Changing eating habits as well as beginning to exercise regularly will not only improve mental health but your physical health will incline immensely, reducing the risk of impotence.